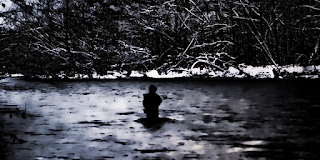 It's October and that means three things: incredible fishing, purdy colors, and the veil between the world of the living and the dead is at its thinnest.

Some people who believe in ghosts have a theory for the presence of the paranormal. They call it "Recordings of Past Events." According to this theory, ghosts are basically recordings of past events in certain surroundings-- energy that is trapped somewhere in the space-time continuum and allowed to replay emotionally charged events again and again and again.

I really don't know if I believe in ghosts. But if I did, I'd have to ask a question. Who says that these recordings can only be of dead people? I've had some pretty emotionally charged experiences in my life. Maybe somewhere, right now, I'm haunting someone?

What if we leave a little energy behind here and there?

If I've left some energy anywhere, it would be a sharp bend on the South Branch of the Au Sable. Ever since the first time I fished this spot, I've had a strong emotional connection to it. I don't know how many times I've fished this stretch of water until the wee hours of the night during the drake hatches of summer, or during the mousing season. Almost every time, I've been creeped out by a strange sound in the bushes, disembodied splashes of water, or just an eerie feeling in general.
What if those sounds or splashes were me, haunting myself?

I wonder if its possible to purposely leave a little energy behind in certain places? That'd be a hell of a great way to keep people from fishing your favorite spots.

What if when you're daydreaming about a spot from the comfort of your tying desk, or from work, or wherever, you are actually transferring a little bit of emotionally charged energy to that location?

Sometimes, during my daydreams, it feels like I'm there.