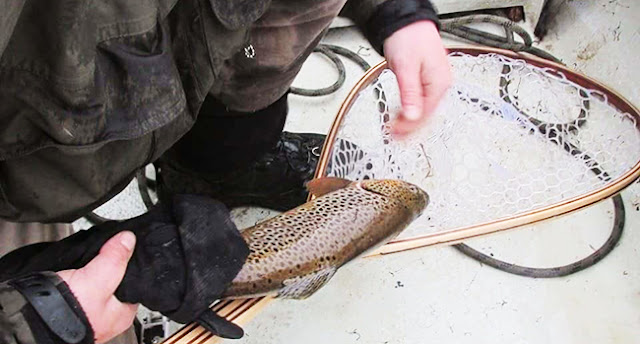 Waiting for drakes in painted-on waders

There's one thing that has always terrified me about guiding women, and that is wader rentals. I can't stock 80 sizes of waders and boots, so I work with an area fly shop. I get the client's measurements, pick waders up the day before, and hope like hell they fit. I had a half-dozen women rent waders last year and no issues regarding fit, so it was just a matter of time before I ran into problems.

I met Claire and Rob at a little diner east of town, locally famous for its breakfast menu and homemade pies. It was Rob's birthday and Claire decided to get him an "experience" instead of another "thing."

When we got to the river, I rigged rods while they investigated their waders. Claire struggled. I pretended not to notice, hoping she'd get them over her gut. Then I looked at Rob who already had his on. Rob looked at Claire, Claire looked at her husband, and then they both looked at me. No one spoke. Mick Jagger's leather pants couldn't have been tighter. I was mortified and can't imagine how embarrassed she must have felt. Fortunately, she fit in Rob's waders. He fit in hers. And all was forgotten when we started catching backcountry brookies on dries. 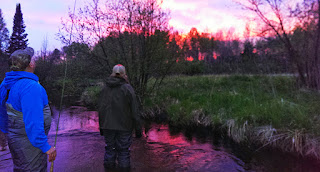 A couple of days later I had John and Lloyd in the boat on the mainstream, hoping to run into brown drakes. Judging by the empty trailers at the takeout, we had at least a half-dozen boats ahead of us, and I let three pass us earlier. I tried to shrug it off, saying, "Let 'em pass, they're all douchebags anyway, we'll pick their pockets."

I turned my light on to see what we were up against and the fish rose again. There was a steady stream of drake duns floating past a skeletal shrub sticking straight out off the bank. You couldn't cast upstream or above. We lifted anchor and continued back into the mainstream, defeated.

By that time, there were fish going everywhere, and other boats on every bend or logjam. The fish we found were super shy, and we pulled out at 2 a.m.

The next night Bob and Nate joined me for a trip. To avoid crowds and find unmolested fish, we covered more water on a longer float and it worked out great. Bob, who's been flyfishing longer than I've been alive, said he'd never seen so many drakes in the air. In between fish, we listened to owls, whip-poor-wills, and howling coyotes. "Look up," I told Bob. The bugs were gone, but every star in the sky was out, flanked by silhouetted trees on each side of the river.

Being a textbook introvert, this is where I leave the Au Sable to chase drakes on less pressured waters. I'll be back in a couple weeks for hex, but only for a few days until word gets out on them, too. This is your June, and it'll end soon, no sense wasting it in the circle-jerk of leap-frogging boats.
at June 11, 2015