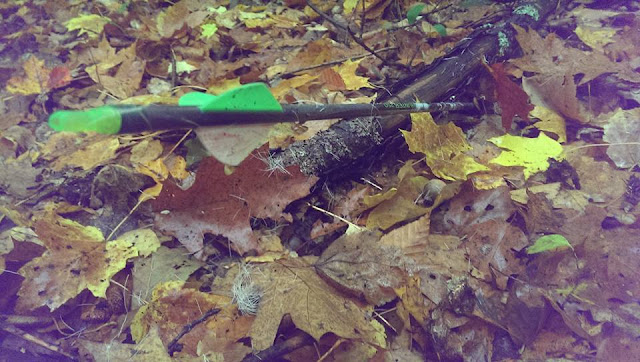 I only hit the snooze button once this morning.  A little over an hour before first light, I was in my tree and good to go.  The forest was pitch black.  I'd never been up this tree before.  For all I knew, I wasn't going to have any shooting lanes if any deer came through.  The half light came around 7:30am, and I realized I had some small lanes to work with.

The wind was coming from a different direction than what the weatherman forecast.  Which I was okay with, but at the same time unsure what the deer would think about it.  The wind was supposed to be from the southeast.  The deer were supposed to come into the wind towards their bedding area from the northwest.

But instead of coming from the southeast, the wind came from the east.  And instead of coming from the northwest, the deer came from the southeast.  The first doe came through along the base of ridge I was using to funnel them into bow range.  Right away I decided she was a shooter, but she was quartering towards me, with her nose straight up in the air at about 20-yards.  She knew something wasn't right and I was certain I was about to get winded.  Despite her being directly downwind of me, the morning thermals caused her to let down her guard and actually move closer to me. She stopped in one of the best lanes I had in that direction.

I drew.
She turned broadside.
I picked a spot.
I made sure I was using the right pin.
She looked backward over her opposite shoulder, basically giving me a quartering away angle.
I let the arrow go.

She ran 10 yards, stopped, kind of circled behind the other deer who came up behind, and then they all continued northwest along the ridge.  Judging by her body, language, I missed.

Maybe my arrow deflected off an unseen twig?  Maybe I peaked as I took the shot?  Maybe I didn't bend at the waist?

I waited about 30 minutes before getting down from my tree.   My arrow was sticking out of the ground right where it was supposed to be.  There was light colored hair, light blood on the cock vane, and talowy fat greasing the shaft.  Nervous, I called my friend Steve to come give me a hand.

Three hours after I squeezed the trigger, we began tracking her.  The first 50 yards was easy.  There was really good blood.  Then it got tough.  We crawled on our hands and knees spotting a drop here, few drops there.  The rain started and a few minutes later, we found our last drop about 100 yards from where I shot her.

We circled out in front.  We broke the area up into grids.  Nothing.

Steve, who has a lot more experience than I do, thinks I made a non-lethal, low shot.  I hope he's right.  The thought of her being dead out there tears me up.  But I don't know what more we could have done to find her.
at October 24, 2015