Last weekend I picked up my Au Sable Riverboat, "Summer," from winter storage.  There are few things in life better than hooking your boat trailer up for the first time in the spring and seeing that all of your trailer lights still work.  Driving her home, I got this feeling of completeness every time I looked up and saw her in the rearview mirror.  Patsy Cline's late 60's country hit, "Back in Baby's Arms," playing on the radio.

I got home, backed her up my driveway, manually pulled her off of the trailer hitch and walked her into the garage.  This means I'll be parking outside now, as my wife's car gets the other half.  And I'm ok with that.  After all, its the least I can do for her for letting me spend so much time with another girl.

Its kind of funny how boats are usually feminine-- though I'm not sure I've ever heard a boat referred to as a woman, they're always girls.  Even more experienced boats aren't called women, but instead, "old girls."  If a boat isn't a girl, its neither masculine or feminine, but an "it," and usually named something funny or clever.


Deep Ship
She Got the House
Whiskey Tango Foxtrot

My first boat was a Clackacraft 16' LP.  Right away I could tell she was a bad ass and needed an appropriate name to reflect her personality.  I named her Lagertha, after a famous viking shieldmaiden who "had the courage of a man, and fought in front among the bravest with her hair loose over her shoulders. All-marvelled at her matchless deeds, for her locks flying down her back betrayed that she was a woman."

I took that Clacka places a 16' driftboat had no business being and had a ton of fun in her, but sold her and purchased a Stealthcraft Hooligan raft, another boat with a biker chick vibe which I named, "Lagertha II," who I sold to purchase my dream girl, an early 90's pinup Au Sable Riverboat I named, "Summer."

Summer was built in 1992 by Lacey Stephan in Grayling, MI.  She was his 13th boat built.  Some find that number to be bad luck, but I think its just more proof that we were fated to be together as my wife's lucky/favorite number is 13.

Lacey built her for the Mason Griffith Founders Chapter of Trout Unlimited's banquet that year, where she would be raffled off to someone who purchased a single $20 raffle ticket.  That lucky someone turned into a client when I was guiding a couple years ago on the Black.  Ironically, I remember him mentioning that he had an old Au Sable Riverboat on the first trip I had him on, and that he was thinking about doing something with it as he preferred to be the one fishing, not steering the boat.

He must have told the same thing to another local fishing guide who is wiser than myself, as he ended up trading him 10 guide trips for the old girl.  Fate stepped in just hours after this deal had gone down when I messaged this other local guide and asked him if he knew anyone looking to buy a raft.  A little back and forth took place, and next thing you know, I'm picking up my first Au Sable Riverboat.

My close friends think I will turn around and sell Summer after this season, but I'm not so sure.  Our relationship is special.  There is something magical about going down the river in her.  Its so slow motion, you feel like you're moving back in time.  Her quietness occasionally interrupted by the ticks and scratches of the push pole contacting subsurface rocks and gravel, or the drag chain, which sounds like distant bells, intermittently whispering in the wind. 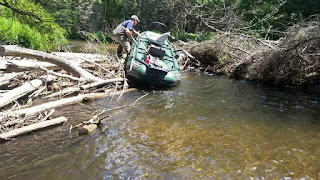 When it came time to name my Au Sable Riverboat, "Lagertha III" just didn't fit.  This boat wasn't going to be getting portaged through backcountry cedar swamps, or over log jams, or raced down the Sturgeon to heavy metal.  No, she would be used in the quiet waters of the upper Au Sable, and other similar streams, mostly to rising trout and bird music.

I still need to put a fresh coat or two of spar varnish on her, but its still too cold for that.  We'll hit the river for the first time of the season this morning.  I'm not planning to fish, but just want to go down the river for a few hours.  But I'll bring a rod and a few flies along, just in case.

The first float of the year is a pretty happy time.  One year, we mocked elitist fly anglers everywhere by anchoring the boat in the middle of the Au Sable, just downstream from the put in, and played Ave Maria on a Bluetooth speaker while we smoked cigars and drank cheap blackberry brandy.

I don't fish through the winters anymore.  There are better things to do, like trap beaver and snowshoe and tie flies.  Though the last few years, the snowshoes weren't really necessary.  Trout fishing is a summer thing for me now, so when it came time to name my new boat, Summer seemed appropriate.
at March 24, 2018