I Heart Public Lands, Volume I

Living so far north, we typically go south to vacation or visit family-- meaning we get to see all the traffic coming north on our way south, and vise versa on our way home.  It always blows me away to see three lanes of bumper-to-bumper traffic from Detroit up past Bay City going the opposite way.   Take that 150 miles, multiply by 5,280 to convert it to feet, divide by your average family car length of 15-feet, times your average american family of 3-people, times three lanes, and you've got about ~475,000 people heading north for the weekend- and that's just on I-75 and doesn't factor in US23, 127 or 131-- all, day, long.  Thats a lot of people driving north to enjoy our back yards, which is a nice reminder not to take where I live for granted.  All those folks vacation where I get to live in the heart of northern Michigan because of the abundant opportunities we have up here to enjoy natural resources, (camping, fishing, canoeing, backpacking, boating, etc.) almost all of which are on public lands.

You think about all of the northern Michigan businesses who are getting a huge influx of customers from downstate on weekends and holidays thanks to the recreation made possible by public land, and you have to wonder why some of our elected officials are so quick to limit or reduce those public land opportunities that these small businesses and big boxes are benefiting from?

One of the key pieces of anti-public land legislation passed by anti-public land legislators in the last decade was the Land Cap Bill passed by the State Senate back in 2011 and signed into law by Governor Snyder in 2012.  That bill was introduced by Sen. Tom Casperson (R) of the western UP, who fortunately is term limited-- don't let the door hit you in the ass on the way out-- but unfortunately, was almost constantly attacking our public lands during his terms in office. 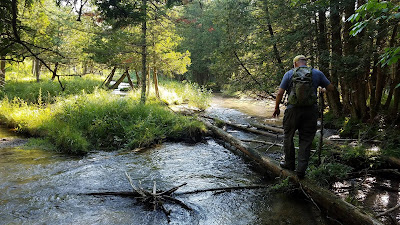 This is how the current republican party works (sorry GOP readers, but I'm not aware of any non-republican government officials actively working against our public lands, and attacking our public lands is actually in the official republican party platform which is why its no coincidence that this kind of thing is happening simultaneously in multiple states throughout the country and at the national level.  I know there are a lot of republicans and alot of republican leaders who don't like that its in there, but it still is, and until its not, I'm calling you out.  The Democratic party is perhaps more useless when you consider their inability to get anything accomplished and their constant preoccupation with republican built straw men, but at least they aren't trying to steal my public lands from me).  There are companies who want to exploit natural resources on our public lands for their private profit.  They have our elected officials in their pockets, and tell them that the rules protecting our public lands are costing them money or preventing them from making more money.  The repubs are actually smart about how they attack their rich donors' problem.  They don't come at our public lands with a bazooka.  They bring a pocket knife and try to kill them with the proverbial death by 1,000 cuts, and then every now and then when the time is right, they chop a limb off with a machete.  Eventually, the problem is completely crippled and useless.

Casperson needed a way to make chicken shit taste like chicken salad, so he used the bogus property tax argument.  He stated his primary motivation for the bill was to help local municipalities get their property tax money from the State of Michigan for lands it owned in their jurisdiction.  Those poor local communities couldn't pay their bills cause the State didn't pay its bills on time.  But why didn't the State pay them-- because republicans previously held those payments up at the State legislature.  Its kind of like national republicans who cut the funding from agencies who manage western forests to the point they can't manage them effectively, then scream there are too many dead trees in these forests, we need to cut them all down.   Its kind of like someone going to a restaurant, eating 3/4 of their meal, then plucking a hair from their head and putting it in their food, and complaining about the hair in their food so they can get a free meal.   Its pure deceit.


There are almost no cons to a people having abundant public lands.  Public lands are one of America's best ideas.  If someone can own their own property great, but as a species, human beings have always had a need for a large home range.  Cramp a wolf or a bear into a little zoo exhibit, and they just aren't happy campers.  People are no different.  You cramp us into a small area and we start getting mentally and physically stressed out.  And yet, we're only just beginning to understand the health benefits of spending time in the great outdoors.  But the human need for open spaces is not a new idea.  Between 1821 and 1855, New York City almost quadrupled in population.

"As the city expanded northward up Manhattan Island, people were drawn to the few existing open spaces, mainly cemeteries, to get away from the noise and chaotic life in the city."

Thats right, people used to go hang out in cemeteries to escape the daily grind.  Which, as you can imagine, is kind of a buzzkill, so they built Central Park.  A couple decades later, Yellowstone became the first National Park, which sparked a worldwide movement.  Today, there are over 100 nations with over 1,200 national parks or equivalent preserves.

In total, the American people own 650 million acres of land.  Thats something I don't think sinks in completely for most.  We own it.  So that whole Grand Canyon out west...yeah, its mine.  That beautiful alpine forest in state "x"?  Mine, too.  That trout stream running through Rocky Mountain National Park?  Yup, I own it.

Here in Michigan, we've got a bunch of State land, too.  4.6 million acres'ish.  And while federal public lands are awesome, State land is most near and dear to my heart.  My favorite chunk of State land is one of the crown jewels of our State, the Pigeon River Country State Forest.  I also really like hunting, fishing and hiking on State lands in close proximity to the PRC, but not part of it.  So that gem called the Black River?  Thats mine, too.  In fact, during trout season, I can go catch my family dinner there whenever I want.  The Witness Tree?  It's mine to relax under whenever I want.  All those hardwood hills along Tin Shanty Rd?  Mine to hunt for morel mushrooms each and every spring until my knees stop bending or I die.

Some of those same anti-public land Michigan politicians think we have too much public land in the northern lower.  Despite donating American Flags that flew over the capital for conservation club banquets, or their campaign ads showing them wearing new, crisply ironed hunting clothes, kneeling next to hunting dogs, or paddling a canoe down a picturesque northern Michigan river with their family;  its pretty obvious that they don't actually hunt or spend much time on our public lands, because if they did, they wouldn't think there were too many acres of them up here.  While some areas are relatively untouched, most of our State lands and waters are at or above carrying capacity.

We need more public lands and access to them.  But where do we start?