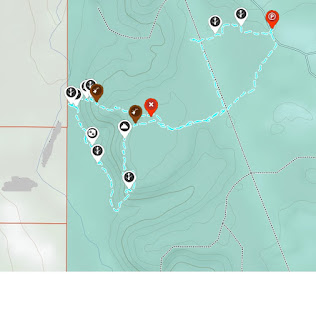 Last night was a great scouting mission. This was my first time going to this location, I initially found it by cyberscouting the mi-hunt website. From what I could see on the computer, it was in an out of the way, overlooked place with an oak ridge that borders a small wetland that has a small trout stream running through it. People from other regions would probably call it a creek. The creek bottom is extremely dense pine and cedar with some aspen mixed in. The oak stand was supposed to be small, only about 100 acres, but as I was driving towards it, I realized it was much, much bigger. The whole surrounding area was oaks mixed with pines, flats mixed with steep up and down hill country. I drove into the area on a two track that doubles as an ORV trail. My plan was to walk the transition between the oaks and dense creek bottom.

I parked a half mile or so away from where I wanted to cut across to get a feel for the place. The top of the ridge was rolling hills of mature oaks and immature pine trees. Plenty of cover for deer to move around and feel secure in the daylight. When I got to the oak ridge I was kind of shocked by how tall and steep the hill was going down towards the creek. It was more like southern OH hills and I decided to replan my scouting route. Going in, I was certain the best bedding was going to be in the creek bottom, but seeing the size of the hills, I started thinking about possible hillcountry bedding, too, and realized this place was going to need at least one more scouting trip this spring to cover everything.

I decided to go from a south facing point on the topo and work my way north and scout the bottom first. I know, I know. Hill country bottoms are notoriously difficult to hunt. But I was really torn. The best bedding cover is down in the wetland around the creek. There is also water there. I’m sure these deer use both the hills and creekbottom as bedding areas based on various conditions. I worked south along the ridge towards the point and marked an area that had a good amount of doe scat. When I got to the south facing point, there was a monster rub that was probably 2 or 3 years old. The kind of rub that screams mature whitetail.

I looked all around but didn’t see any sign that a deer was bedding on the point. Which made sense, the rub was old, but, I was hopeful. There was a faint runway going down the spine of the ridge. I followed it down until I hit the transition line to the creek bottom, and then followed the transition line back north. It was open, but not open, if you know what I mean. The Oaks and pines came right down the hill to the edge of the thick cover. In places I could hear the creek, which is at high water, gurgling over rocks and logs, but I couldn’t see it. A deer could safely eat acorns along the edge and dive into the cover or run up into the cover on the hillside if danger came. There was another large, old rub. The kind of rub height that I would think was elk, but it wasn’t elk. A little way on I had three pileated woodpeckers fighting or doing some kind of mating ritual. That was cool. And then a scrape. I felt rushed at that point and was losing light due to being down in the valley and didn’t take the time to inspect it for tracks. 50yds later, I found another monster rub with three smaller rubs nearby. Losing light fast, I hiked up the ridge shortly after. 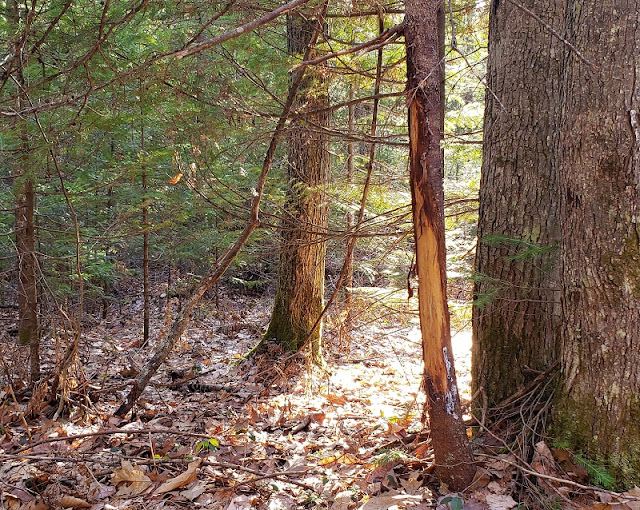 This is definitely a place that can grow a nice buck. I can’t imagine many guys are going to go down in that valley to hunt deer. The packout will scare 99.999% away.

The thing I’m struggling with now is how to hunt a deer down in that bottom? Gonna need to search the forum archives to find tips on hunting lower elevations. Maybe if I get close to the creek and let it pull my scent away from the woods? Definitely going to throw a trail camera up at this spot to see if anything survived to the coming season.
at April 02, 2020