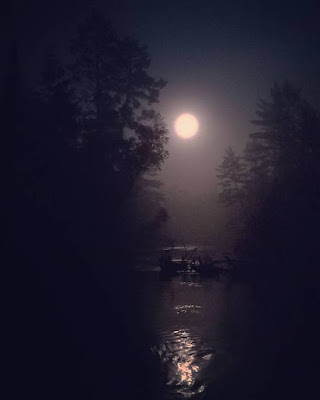 It was early-June and Donny had just finished rigging his rod up at the end of one of the countless sandy parking areas off of Canoe Harbor Rd.  He figured instead of cutting straight down to the water from the Mason Tract Pathway, he would follow the trail downstream for a little ways below the bend, then slowly work his way up to the deep pool where he could sit on an old cedar sweeper and wait for the evening rise.

When he broke through the brush and reached the water, he was surprised to see he had gone a little off course and landed right at the pool.  He was even more surprised, and disappointed, to see another angler just above the head of the pool, casting a small wet fly down and across.  Hoping he didn't see him, Donny was about to slink back into the tag alder when the angler shouted, "How you doing?" He reeled up and slowly waded across and then down to where Donny was standing.

The old man wore old rubber hip boots, an olive vest with a large chunk of yellowed wool on his left breast.  He was fishing bamboo-- old bamboo, too, by the looks of it.  Peeking out from underneath his vest was a green and black flannel shirt, held together in it’s center by small, pearl white buttons. His greasy, slicked-back hair was dark brown mixed with streaks of black and silver. It was like he had walked straight out of the 1950s.

Donny wondered if in 30 years, some kid would look at him and think he'd walked out of the early 2000's?

“How’s it going?” the stranger asked.

“Not bad, better than a day at work.” Donny said

The old man laid the vintage looking bamboo fly rod across an overhanging bush, just feet downstream of where Donny had watched a small deer fully submerge it’s head to eat aquatic vegetation a few years earlier.  The old man pulled a pipe out of his pocket and mentioned that he fished the same spot the night before.

“Oh yeah?” Donny asked, trying to seem genuinely friendly and not show that he really wasn't interested in what the old man had to say.

Sometimes you fish to embrace the company of others, but if the company isn't planned, you probably fish to escape it.

“Yeah. There was a big brown feeding on the seam that flows around that log. I threw everything I had at him, and then finally got him to take, but he spit it before I could set the hook. After that, he was gone.  I'm hoping he'll be feeding again tonight.”

Donny didn’t really hear what he said as he was too busy not really giving a damn, but the old man's voice quickly came back into focus as the words, “I’m hoping he'll be feeding again tonight,” rolled off his tongue.  Donny realized they were both jockeying to fish the same water.  Instantly, Donny hated him.

“You fish The South often?” the old man asked.

“Its been a while."  Donny said,  stopping himself from telling him that this was his favorite spot.  He didn't want him to know how much he wanted to fish it.  He used to spend a lot of time there before he moved out to New York a few years before, after the plant shut down. This was his first time back.

He was lying, no surprise there, all fishermen are liars, but the old man was a particularly bad liar.  There were no cars between them and M-72, and Donny knew it.

“I’m heading another couple bends upstream, why don’t you fish here and see if that big brown comes out again?” Donny couldn't believe the words came out of his mouth.

“You sure?” the old man asked.

“Yeah!” Donny said, trying to sound genuine and altruistic all at the same time.

“Thanks, nice talking to you!  I’ll just go sit on this cedar tree and wait for that nice brown to come back out!”

“Good luck!” Donny said as he started to wade towards the next bend. "What a douchebag,"  he whispered to himself.

“You, too! Hey, what was your name again?” the old man asked

“It was a pleasure to meet you, Donny.”

“Nice to meet you too, uhh, what was your name?”

“Nice to meet you, George. Maybe we’ll bump into one another again someday. I better hear your drag screaming when you hook that brown tonight.” Donny said with his best impression of a friendly smile.

Donny could hear George whispering to himself as he waded around the bend. Just as Donny made it to the top of the riffle above the bend pool, a good fish rose somewhere between them.  Donny turned back to locate the source of the sound and to see if George had heard it, too, but George was gone.

Donny sat on the bank at the next bend up for a little while until the bugs were thick and it seemed like every fish in the river was rising.  He didn't see anything on the water, and suspected a spinnerfall somewhere up stream had started.  He could hear the big fish gulping down near George all the way up where he was sitting.  The brown gulped again, and then again, and Donny wondered what George was waiting for.

Donny crept downstream, letting his legs drift down with the current with each step so as not to make a wake, and realized that George was still gone.  The fish rose again, creating a vortex as it sucked a bug into the black water.  He put a short reach cast out from just upstream and the big trout sucked the fly down on the first drift-- only Donny set the hook too early!

Donny had actually watched the fly get pulled below the surface of the water.  The fish rose again in rhythm, but paid no attention to Donny's fly on the next attempt.  Not wanting to spook the fish, Donny turned away from it, and while there was still a little bit of light left, he had to use the red beam on his headlamp to see the tippet as he tied the fly on; a hackle stacker brown drake.

Donny turned the light off and faced the fish again.  The first two drifts with the new fly were ignored, but three large, white bubbles bobbed to the surface just after a loud gloop on the third pass.  He didn't know if the rise was to a natural or his fly, but he lifted the rod high to set the hook anyway, and the fish and angler went through the same motions all fish and anglers do when fighting.

The cedars along the bank sat motionless as Donny steered the fish into his aluminum net under the red light of his headlamp.  It was easily the biggest brown he had ever caught- lake runs excluded.
During all of the commotion, Donny had failed to notice that another angler had waded up to the pool.  It was George. Donny flinched when he saw him.

"Hey George, check out this fish!"  he yelled.  By now the hook was free and he had the fish cradled in both hands facing upstream waiting for it to slip away.

"Hey, George, you mind taking a picture of me and this fish?  Here's my phone, its ready to go, just touch the white button!"

"That's a pretty shitty thing to do to someone, you high holing asshole!"  George sneered, letting go of the lump that had built up in his throat..

"I thought the hole was empty."  Donny replied

As George spoke, his voice turned into more of a growl, his frailing voice grew louder and more clear with each word.  He shoved his pipe into his chest pocket.

"I was right there below the tail the whole time, you little prick!"

The insult took Donny by surprise, he hadn't heard anyone use the word prick since he was a kid.

"I couldn't believe how you just waltzed right in on my spot-- on my fish, just before I was about to go after him!  I've been chasing that fish all season you selfish asshole!"
George clenched his fists.

The fish pulsed its head back and forth, almost revived from the fight.  Donny kept his head pointed down so the red light stayed on the fish, but his eyes were pointed at George who was inching closer as he vented.  Donny fantasized about lifting the fish out of the water and taking George's head off with it.
The trout burst free of Donny's hand, disappearing into the black just past the reach of his headlamp.  He stayed bent over and swished both hands back and forth through the water to get the fish slime off of them, and quietly celebrated.  This was what he came home for.
George was within just a few feet and still cursing and scolding Donny for fishing the bend pool.  Donny struggled to restrain his growing anger with George.  He was bigger, in better shape and would have his way with the old man in a fight.  Whatever this angling version of road rage was that had taken control of George, Donny had enough of it.
Donny turned and started wading up to the riffle so he could cross the river.  George was still ranting, but his voice grew fainter, dissolving with each step as it was drowned out by the river.  When he reached the shallow gravel bar to cross, he looked back downstream at the pool to look back at George who the river had finally silenced.  The moon had crested the treeline and now fully illuminated the bend with tones that were part sepia, part black and white. George was gone, maybe he was never there.