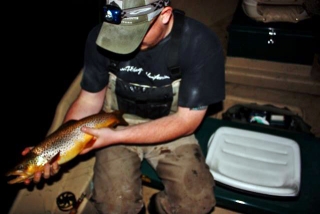 It's been one of those weeks when you forget to pace yourself. You hop around, fishing a different stretch of a different river every night, chasing bugs that were supposed to be here a week earlier. You can't take a night off, because if you do, you might miss it.

The hatch lasts a couple weeks on most rivers. And here in northern Michigan, you can follow it north from one river to another, and make it last over a month. But, it's that first night on a stretch of river when the fish go insane. The second and third nights aren't bad either, but after that, it's like the fish just get full.

You've been standing in the river for two hours waiting, when your wife calls at 10 p.m.

"You on your way home yet? We need milk."
"Babe, it's not dark. I haven't even started fishing."

The sun falls, the moon rises through a pink sky, and you start to wonder if you picked the wrong beat. You scan the water flowing around your legs with your headlamp and there's nothing but midges and the occasional clump of sulphurs.

You text a buddy who is fishing somewhere else.

They're here. One. Then two. Then 80,000. A stretch of river you'd swear only held dinks starts making sounds that can, and do, visibly shake most anglers. Long after the hatch is over, you can still hear the sounds on trips into the fall and through winter. They're the sounds of big, happy fish.

For the fish it's like Super Bowl, Fourth of July, and Thanksgiving all mashed into one. It's like their mom got a job as a cook at their favorite restaurant. They just lose it. And if you've never experienced it, you have to.

More texting after three days on and no more than three hours of sleep.

The fish you're about to cast to sounds like it's at least 30-inches long. It doesn't sip, it sucks. And if you manage to get a drag free drift in pitch black and have your 3XL #2 parachute float by at just the right time, you're going to get an opportunity to set the hook. Even if you know it's about to happen, it still surprises the hell out of you. You won't believe it's happening until you lost it in a log jam or felt it slither out of your hands. Even after all that, it still won't set in until tomorrow, when you're at work, running on two or three hours of sleep, wondering which stretch of which river you should fish tomorrow.