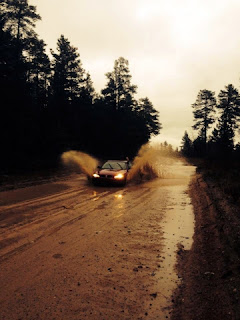 Sometimes rain is your best friend, and sometimes it's your worst enemy. Today was the latter. Our first stop was near the mouth of a mid-size Lake Huron trib. We were soaked before our rods were strung. Jason went upstream with an indicator rig while I stayed low to swing down to the mouth. A few hours later we regrouped and decided to head farther north, to the Two Hearted River.

Google Maps walked us through a maze of washed-out logging and snowmobile trails, which is fine if you've got four-wheel drive. But not so much in a Grand Am. We drove through the remnants of a huge 2012 forest fire and into a barren wasteland. At the mouth of the Two Hearted River, Lake Superior crashed against the rock-covered beach and had me wishing for a surfboard. We dinked around the sand dunes at the mouth, and decided to head upstream to escape the 40mph winds coming out of Canada.

Nick Adams fished the Fox in Hemingway's "Big Two-Hearted", and we couldn't help but take photos of each other standing in the Two Hearted, drinking Two Hearted Ale, while reading the classic. We parked upstream and bushwhacked to the river to find the water was black and high. But the whole scene was still gorgeous. Jason headed downstream, and I found a horseshoe bend that dumped into a greasy run. 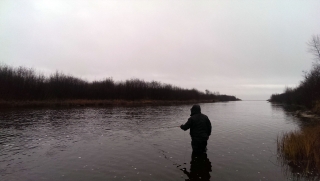 Let me preface this by saying I'm still figuring out the whole two-handed thing. I've had a few suspicious bumps, but have never hooked a real live swimming fish on the swing. The fly came through and was just about to dangle, and there was a sudden tension that turned into a subtle pull. I lifted and immediately felt head-shaking.

And I suddenly forgot everything I knew about catching a fish.

I pointed the rod up and backpedaled. A huge Coho slashed on the surface. And then the line just went limp. For about two milliseconds, I was heartbroken. Then I screamed a sound that was a blend of Howard Dean's concession speech howl and a wolf howling over a fresh kill.