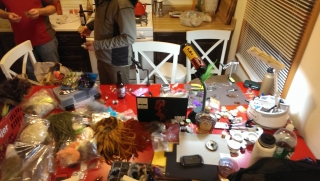 We'd planned on fishing Michigan's Pere Marquette on Thursday, but nearly every river in the state blew out. So we took aim at a tailwater and drove to the Boardman River in Traverse City—or TC as it's called by locals.

Navigating a busy Front Street we walked under the awnings of trendy shops and restaurants, dodging shoppers who seemed accustomed to a couple guys in waders carrying 11-foot fly rods. At the river we fished to the mouth at Grand Traverse Bay, with nothing to show for our efforts except for some killer cheese fries from a street vendor.

Arriving in Pennsylvania eight hours later, I introduced Jason to the group of guys assembling for the Rustbelt Bake. Jason doesn't participate on The Drake message boards, but had heard rumblings about how rowdy it and its users can be, and was unsure of what to expect.

I likened our group to a biker gang. Sure, someone might tell you to go die in a fire—and mean it—but they'll also be the first to lend support to someone who needs it. We stood around a blazing fire through sporadic bands of lake effect snow with guys from all over the country from all walks of life. Each had little in common except a deep passion for fly fishing.

We woke early Friday and drove over the blown out Catt to search for steelhead on the lower Niagara. We stopped into the Oak Orchard Fly Shop outside of Buffalo and got some of the best service I've ever experienced. If all fly shops took care of their customers the way Nick took care of us, big boxes would crumble. 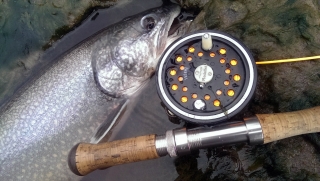 At the Niagara Gorge the river's size and demonic currents are mind-blowing. You fish at the base of a steep canyon wall and don't dare wade more than knee deep or risk being sucked into a vortex to the bottom of the river's 180-foot depth. We fished a huge eddy. Upstream was downstream, then it was upstream again, and then it stood still as glass. Fish crashed baitfish on the surface as Bonaparte's Gulls came at them from above.