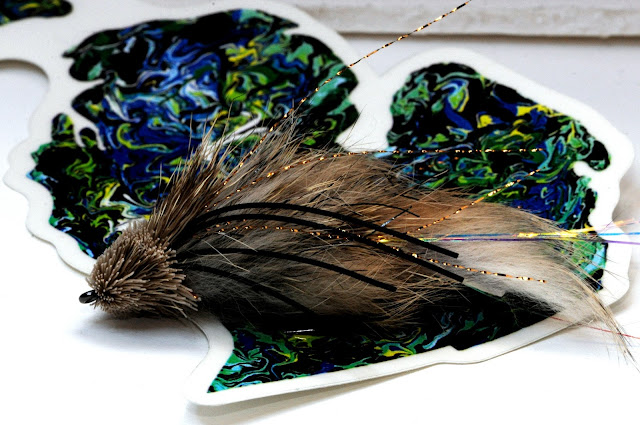 An old timer with an 8-inch Buck knife strapped to his belt once told me that mousing for trout was invented on the North Branch of Michigan’s Au Sable River.  Not long after brown trout were first introduced there– shortly after the grayling were gone– an angler was field testing some bass poppers he had carved, and accidentally figured out that these German fish were eager to eat at night.

For the last 100 years, we’ve rarely heard of mouse fly patterns being used outside of the wolverine state– aside from Alaska and other localities of the Pacific Northwest, and even there, its primarily something done in the day. Anglers elsewhere around the country just don’t have the compulsion Michiganders do to mirror the trout’s nocturnal behavior for the latter half of the summer.

Having sewed my fly fishing oats on northern Michigan trout streams, it kind of blew me away when I lived in upstate New York for several years and found out that all those famous Catskill streams were completely vacant in the middle of the night. All of that classic, picture perfect mousing water, hours away from 1/3 of the entire U.S. population, just empty.

You might have ran into the guys who are coming off a mousing trip at the boat ramp. Their skin is as pale as the moonlight. Still wearing yesterday’s clothes, smelling strongly of 5-Hour Energy and brown trout, they shuffle out of the water like zombies as you’re struggling to thread 7X through the eye on your favorite trico pattern. Their bloodshot eyes just sort of glaze over when you start talking about geo fluvial principles and the underlying physics behind a drag free drift. Don’t take it personally.  Its just that after they got into mousing, catching 15” fish on size #20 dries just kind of got the volume turned down.
While you think you know the river pretty well, these guys can literally fish it with their eyes closed. Just don’t ask them to fish it with their eyes open, as some have never actually seen it. They have no idea that the beaver meadow is covered in wildflowers, only that their backcast picks up some goldenrod every now and then.

But there is one problem.  Hookup rates while mousing are dismal at best.  If you get 10 strikes, you’ll be lucky to set the hook on five of them.  Some guys think its because the fish are just coming up for a taste test, or to stun the fly.  A couple years ago, after reading Paul Schullery’s book The Rise, I started to think the low hookup rate had more to do with the fact that a lot of mouse patterns are just too buoyant.  Fish don’t eat like we do, they suck their meal in with a vortex of air that works like a tractor beam and brings their prey into their mouth.  If they didn’t release the suck, they would lose a lot of food as their body displaces water as they move forward, pushing their food away from them.   So a more buoyant fly not only resists the force of the suck, it inherently moves away from the suck.  It’s a double whammy.

So I went to the drawing board and looked at the features of the more successful mouse patterns I’d fished, and those that never really caught fish.  The ones that really sucked all had one thing in common, they were crazy buoyant.  One in particular had triple thick 3mm foam and a bass popper head.  Yeah, it made all sorts of noise when stripped through the water, and rose what sounded like some really nice fish, but only a 40”+ Musky would have had the lung capacity to take that fly down.

There were two patterns I’d had the most success with.  The first was basically rabbit and foam slider.  Hookup rates with that fly were probably in the 50-75 percent range.  The other was basically a Gartside Gurgler tied with rabbit and 4mm foam.  I attribute that flies success to how well it sounded coming through the water.  It was like ringing the dinner bell.

So I decided I wanted a fly that didn’t use any foam.  This fly had to float well enough to produce a nice wake, and if wanted, make some noise on a hard strip.   The result is the Otsego Mouse.  Somehow, this fly does everything I wanted it to, and maybe even more.  It quivers through the water on a dead swing, all the while producing a distinct wake.  If the head shape is trimmed more aggressively- think, Taps Bug- it will splash and pop with the best of them.  I think it would also make a decent frog imitation for bass fishing, as well, but so far have only used it for trout.  It will eventually sink.  I get about 30-45 minutes out of it before I need to switch flies.

Hookup rates aren’t 100%, but so far, they’re greater than 50-percent thanks to the fly’s tendency to “stick.”  An easy way to test a fly’s stick factor is to drop it in the water, and with your fingers spread out, move your hand through the water to scoop up the fly.  If you can move your hand at an equal rate, you’ll see differences in different patterns of all types.  A good comparison is the high floating Catskill dry vs the low floating parachute.  Parachutes outfish Catskill dries for a variety of reasons, but the stick factor is one of the more often overlooked ones.

Until you’ve done it, you’ll never understand what its like out there in the vacuum of space. You won’t be able to relate to the feeling of floating through a forest in a drift boat, head arched back, watching the stream of stars flow overhead between the tree lines. Its about channeling your inner bat so you can determine how far your mouse just splatted off the opposite bank. Its about the surreal feeling of being out there waiting for the moon to set. Its about the suspense of working a mouse down and across while feeling completely vulnerable to those things-that-go-bump-in-the-night sounds that stand up the hairs on the back of your neck.  You’re not after fish, you’re after a fish. Its the one you and your friends have never seen, and the one biologists tell you doesn’t exist.

Email ThisBlogThis!Share to TwitterShare to FacebookShare to Pinterest
Labels: articles