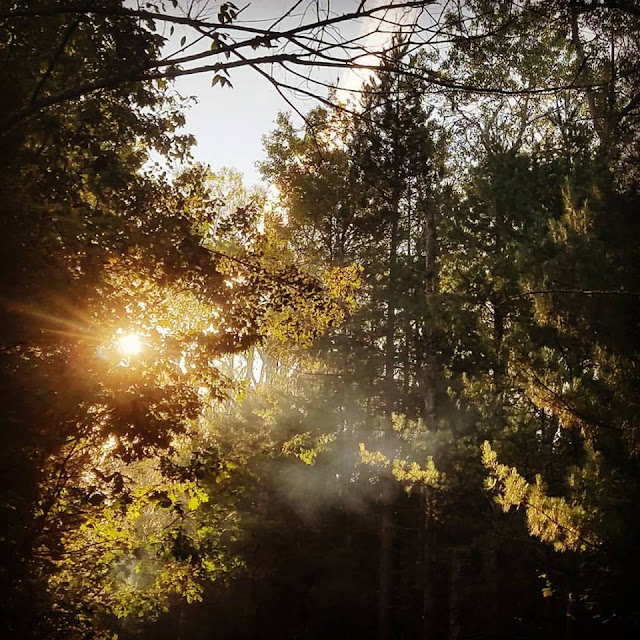 Yesterday was the opening day of the archery deer season here in northern Michigan, which was a Sunday this year.  That means the last day of trout season, 9/30, was a Saturday.  Those two things together meant that you could do a weekend trout/deer camp in the Pigeon River Country, and mix some grouse hunting in to get the most ultimate weekend warrior cast & blast experience ever.

Several of us camped not far off one of the main drags running through the forest.  Lloyd, Carl, Gary, Jake and myself.  There was no agenda, just wake up when you wanna wake up.  Nap when you wanna nap, hunt when you wanna hunt and fish when you wanna fish.  We forgot about schedules and chore lists and bills and any other source of stress in our daily lives.  We just did whatever we felt like doing.  Civilization be damned, for two and a half days, we were wild animals. 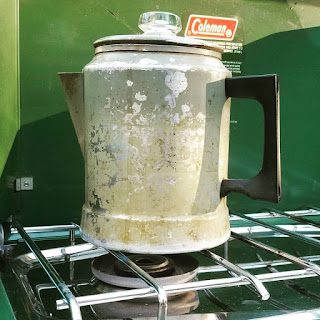 While I packed fishing gear, I never got it out.  Actually, I don't think any of us fished.  Most of the time was spent around the campfire or taking long walks through the grouse woods.  The woods are so alive right now.  We had bugling elk around camp all three days.  They made it tough to get a good night's sleep.  I'd get woken up by a long bugle and then just lay there in my tent staring up at the black, listening for the next bull to go off until the sound came and echoed through the forest, or until I fell back asleep. 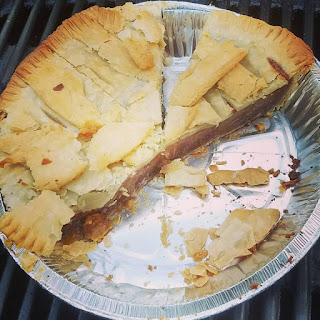 As always, food at camp was 5-star.  Ironman breakfast burritos.  Gary brought beef stroganoff.  Carl brought some homemade apple pie- made with wild, public land apples he and his wife picked in the Deward Tract.  Lloyd made his world famous coney dogs one night.  That was all mixed in with a lot of junk food, black camp coffee, good beer and a little bourbon here and there.

Some of the guys who made it out to camp earlier in the year couldn't make it.  The other Gary was in Montana.  John moved.  Jordan fell off the face of the earth.  Greg was busy.  Hopefully they can make it out for the next round at the opening of the 2018 trout season.

I didn't bow hunt opening morning, opting instead to sleep in and hang out around camp.  Jake and I took a walk for grouse in the afternoon before everyone started to pack up camp.  I brought a bag target, and Jake and I shot our bows for a half hour or so in the late afternoon before I finished packing up.  We rolled out all at once, one vehicle after another drove south down the dirt road before I pulled away from the pack to deer hunt. 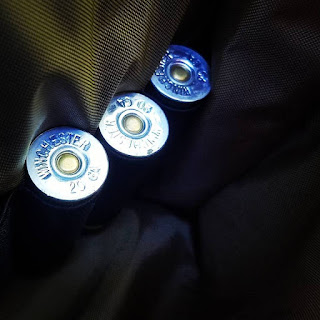 I'd never hunted that spot before, only watched deer moving through there all summer long during trout season.  There were a few really large deer in the group, and I was hoping to get a shot at one.  I hunt out of a climber, and the tree I was thinking I could climb was a little too big so I spent the first 20 minutes trying to find a suitable replacement within range of where I expected them to walk through.  When I did find one, I used my rangefinder and marked 15yds and 30yds from its base with a rock on the ground before climbing up.

Just before I got to the height I wanted to be in the tree, I see two guys in street clothes walking towards my stand.  They were scouting and looking for a place to put a two man ladderstand.  When they got about 50yds from my tree, I whistled, and they walked out the way they came.  Its funny how a hunter's body language changes after they realize they're in someone else's territory, even when it is on public land.  The walk away after you've been alerted you're intruding on another hunter's presence is a walk of shame.  I'm not sure why.

An hour later, I hear something behind me and there is a guy climbing a tree about 40 yards away.  I whistle and he doesn't hear me over the wind blowing through the trees.


I wasn't really sure what the right etiquette was.  Should I yell so he knows I'm there?  Should I climb down and leave?  Suddenly, he tipped his quiver too far over and all of his arrows fell to the ground.  He climbed down, picked them all up and started to climb back up. I whistled again, opting not to yell because we were approaching prime time and we weren't far from the bedding area.  He didn't hear me again and I decided I would just finish my hunt and find a new spot the next time around.  I didn't feel there was any safety issue, as he was in the opposite side of a huge tree, and couldn't see anything my direction anyway, let alone shoot in my direction. 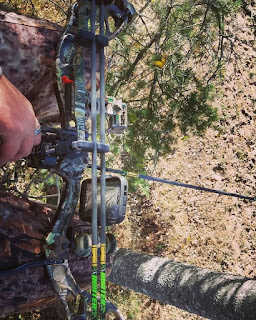 Soon after, I hear a branch pop.  Several deer were moving out of the swamp and heading right for my shooting lanes. I picked the biggest one and shot as soon as I had the right angle and distance.  It was a 30yd quartering away double lung, she only went about 40yds.  When I had her aged at the DNR office later, they said she was 2.5 years old.  I sent Jake a text before climbing down to track her.  He said he would be out to help me drag her out in about 30 minutes.

While I waited, I heard another branch pop.  Another group of does were coming along the same route as the first group.  At the back was another very large doe.  She sensed something wasn't quite right, and after the group milled around for a few minutes, you could tell they were all going to move out because of her attitude.  Maybe she knew something was wrong because the first group of does weren't there?  Maybe she was just psychic.

She stopped quartering away at 35yds and I sent the arrow.  It took out both lungs, pierced the center of the heart, and hit the opposite shoulder before making a loud thwack!  I'd later learn that it dislocated that far shoulder.  She went 30yds before piling up and aged 5.5 years old.

And just like that, I was tagged out.  My archery season over just a few hours after it started.

I gave some meat to Jake for helping me drag two deer out.  Boy was he surprised when he showed up and found out I had another one down.  That other hunter in the tree behind me was from Indiana.  He wasn't sure how he could go back to camp and tell his buddies that he didn't get anything, but the guy 40yds away he didn't know was there got two.  We laughed about what happened, and he was even nice enough to help me track both deer, though there wasn't much tracking to do.

I had them processed by a local guy who did a really great job.  I had him do a couple of batches of jerky, too, which didn't last long after I handed some out to friends and family.  I think that's the best part about hunting- sharing the meat.

Here is some video of each shot 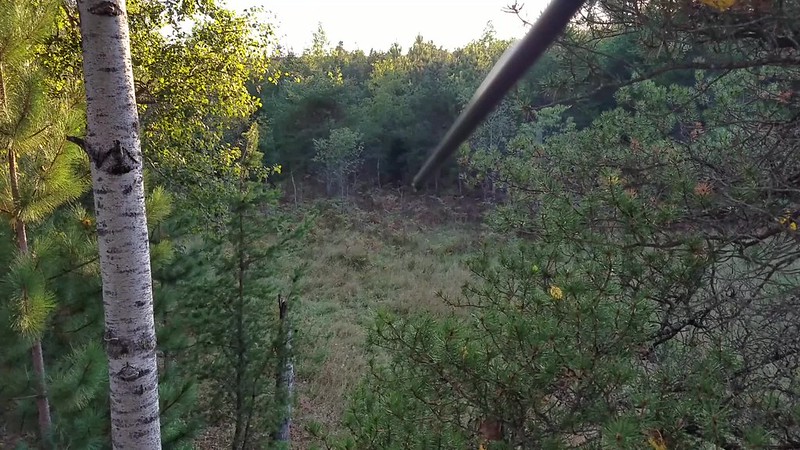 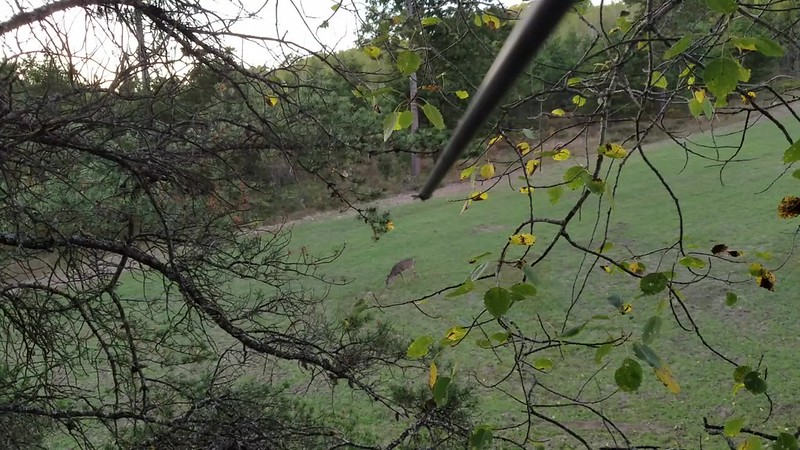