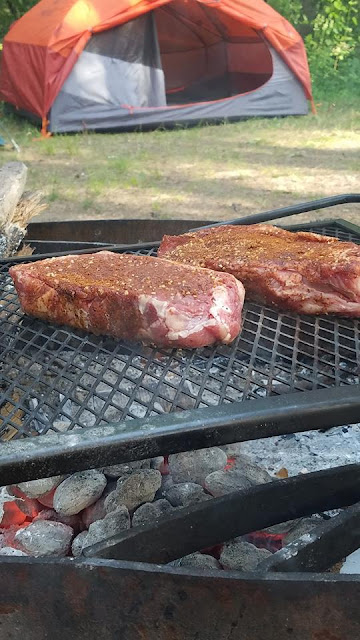 And just like that, its July.  June 2018 was everything a northern Michigan trout angler could ask for.  The bugs showed up and the fish ate them.  I think the thing I'll remember most about the last month was all of the friends I had an opportunity to fish with.  Jim, Al and Joyce, Chris, Gary and his brother, John, John and Lani, Tim and Jerry, Bob, Cam, Tom, Dave, Tom, Doug, Chris and Garret.

So many good memories were made, but for now, I'll only share three:

Meeting and fishing with Tim who asked if he could bring a friend along.  His friend, Jerry, turned out to be one of my favorite writers-- only I didn't know it until a few days later.  Tim turned into one of my new favorite writers, as I scored a copy of his new book, The Habits of Trout: And Other Unsolved Mysteries.  Its an excellent read, and I think Michigan-based readers or fans of Robert Traver's books, particularly, will enjoy it.  The three of us did a float through a section of the Holy Waters then jumped over to a small creek to wade for brookies, then jumped to a different creek for the evening rise.  It was a good day made great from good company.

Tim and I fished together again a couple nights later, where he hooked up with and lost the biggest trout in northern Michigan on one of John's hex spinners.  I'm just busting Tim's balls, in case he is reading.  It wasn't a monster, but it was a pretty good fish that came unbuttoned just as we were about to land it.  The only thing I can figure happened was Tim was fishing graphite instead of his normal bamboo, and the bamboo gods got a little jealous.

Welcome to the Jungle


Then there was an outing with Cam, who writes the popular, Fiberglass Manifesto, blog.  Cam and I have been friends for almost 10 years now, and its always a good time when we get together to fish.  Initially, the plan was to float for hex, but with cool air temps in the forecast that night, I pitched a wildcard idea to float stretch of a small stream I've had my eyes on for some time in my 12' Radisson canoe.

Cam was game and didn't flinch when he first laid eyes on how tight things were going to be- both in the little boat and the water we were going to be fishing.  Wade trips and google earth scouting told me it was floatable with some tight spots.  A friend kayaked it and said it would only take about 2 hours to float, so we put in at 7:30pm, planning to paddle for an hour into the belly of the beast, fish till dark (~10:30pm), then paddle out.

We floated through heavy tag alders that completely covered the river from one side to the other.  It was too tight to paddle, so Cam basically steered us down from the front by grabbing overhanging branches, while I also steered and controlled how fast we were moving from the back with a push pole.  About an hour in, a branch jammed hard into Cam's side.  He grabbed it to pull it behind him while simultaneously leaning away and the next thing you know, we weren't in the canoe anymore. 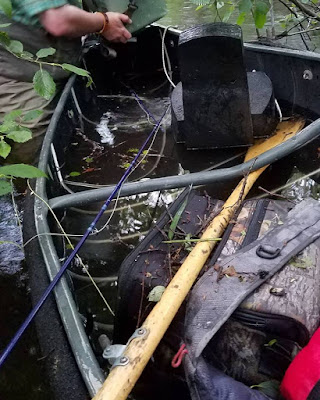 Somehow, most of our gear stayed in the boat.  Cam first went for his dry bag, which had his DSLR, a few lenses, a drone, drone controller, and a bunch of other stuff you don't want to get wet.  But the dry bag didn't work very well as the lid wasn't zipped up.  To Cam's credit, he brushed it off and we continued on through the jungle of tag alders, mostly in the dark, not really getting to fish at all until we made it to the other end of our float at just after midnight.

Despite all the suffering, it was a hell of a great time with a good bud, and I can't wait to float that stretch again.  We'll see if I can talk Cam into it again the next time he is back in northern Michigan...

Catching Up with Tom

Apparently I fish with a lot of great writers, because the third trip I'll talk about was a couple with Tom Hazelton, another favorite writer and old friend of mine from Minnesota.  On the first, I joined Tom and Dave Karcznski-- another excellent writer-- for a hex float on some bigger water I've never fished before.  It was a good float, made better by the fact that we had the whole river to ourselves. 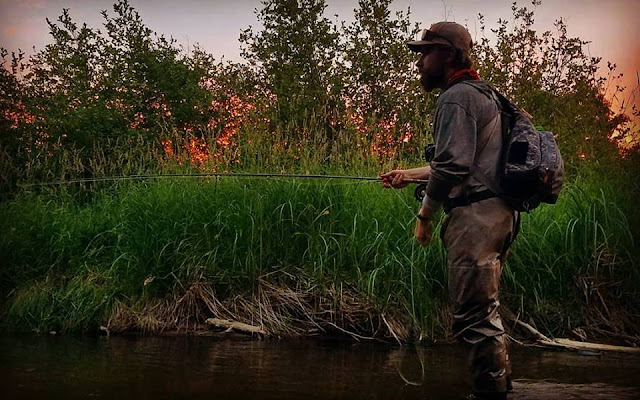 A couple days later, Tom and I hooked back up to fish one of my favorite stretches of small water for brookies.  It was one of those wades where the fish were everywhere they were supposed to be, and if you put the fly there, they ate it.  We landed several fish over the 10" mark, including one near the end that was pushing mid-teens. 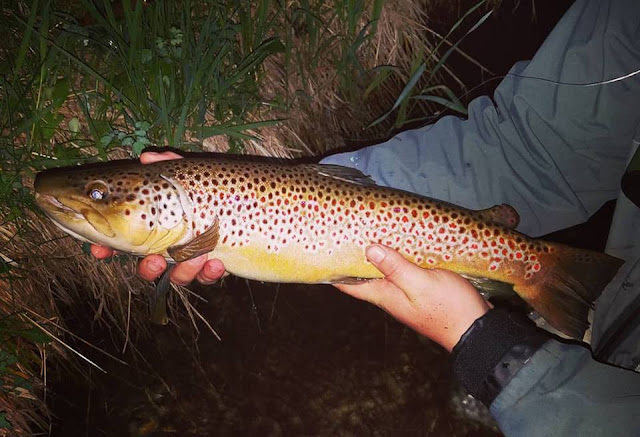 Ok, I Gotta Talk About a Night with Gary

Gary is one of the most fun guys there are to fish with.  The thing about Gary is he isn't the tallest guy on the river.  I wouldn't call him short, but because of his height, he pays extra special attention to where its safe to wade, memorizing how and where the water depth changes on the stretches of water he likes to fish.

On one particular night where there wasn't really any bug activity, Gary put me on fish after fish after fish after fish.  I cried uncle, and he put me on a couple more, including one that went about 24".  That's pretty good dry fly fishing on any river, particularly one with nothing hatching and no fish actively rising.  I only caught those fish because Gary knew where they were all going to be- despite the fact that he hadn't fished that stretch yet this year.  Gary definitely missed his calling as a fly fishing guide.  While I was the one doing all the catching, it felt like Gary was the one really doing the fishing, and I'm pretty sure he got as much enjoyment out of the night as I did.

﻿
And Then There Were a Few Days With Doug...

Doug is a former client of mine, who booked several guide trips with me over the last five years, and grew into more of a friend than a client.  Doug had always come up from Ohio in the fall to fish with me, and at my advice, made a trip up to see what this June thing was all about.  Only he did it on an unseasonably hot several days where the heat index was over 100-degrees.  We camped and fished and ate like kings.  The highlight for me was the pierogies Doug picked up from a market outside of Cleveland from an eastern European immigrant.  These were the best pierogies I've ever eaten.  If I'd have known about them in years prior, I probably would have traded my guide services to Doug for pierogies.