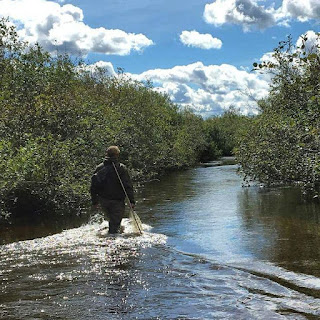 The similarity between the relationships between fishing buddies and married couples is kind of funny.  Really, the only difference is married people live together and periodically partake in acts of physical affection, which fishing buddies don't-- unless you and your fishing buddy are into that sort of thing...

I've been an angling whore, fishing with literally hundreds of people-- some of whom even gave me money for it during my guiding days-- and only a few of those relationships grew into full-fledged, facebook-official fishing buddy status.

Like boyfriend/girlfriend relationships, you don't know someone is going to end up as your fishing buddy when you first meet them.  There is a courtship period where you are kind of feeling the other person out, trying to determine if they are worth moving onto that next phase in the relationship with.  Do they like to fish for the same kind of fish as you?  Do they like fishing the same types of water as you?

There is flirting in the form of sharing pictures of fish you've caught over the years, talking about places you've fished, species you've caught, flies you've created.  But you have to keep your guard up.  What if he is just using you for your fishing spots or to figure out how to tie that secret fly pattern?

Over time, trust is earned and the friendship builds into something more.  Pretty soon you're going on short vacations together to far away fishing spots, or in the case of a long distance fishing buddy relationship, you're meeting up to fish together at various locations around the country.  You're trading family recipes, going to each other's family barbeques and maybe even participating in hobbies that have nothing to do with fishing.  And then before you know it, you're speaking openly with each other about secret spots and sharing knowledge you wouldn't share with anyone else.

Once you reach that point, you don't fish with your other fishing friends as much anymore, and the relationship almost becomes exclusive.  That is, unless you've got another fishing buddy or two-- swinging is cool in fishing circles, just don't share info with one fishing buddy you learned from another, cause that's kind of like adultery.

Its hard to lose a fishing buddy, whether that separation is caused from death, someone moving to another area, getting bored with the other person or just drifting apart.  Most fishing buddy breakups are amicable, but I've seen several that didn't end on such good terms.

﻿
And just like when a boyfriend/girlfriend relationship ends, there is a rebound period after you lose a fishing buddy.  First you're calling people you used to fish with to see if they wanna fish.  Then you're taking chances by fishing with people you don't know all that well.  Just don't let that desperation to find another fishing buddy get the best of you and share the wrong intel or place with them, otherwise you'll have to live with those consequences the rest of your life.

After you're through the rebound phase and just letting things happen naturally, its easy to find faults with prospective new fishing buddies.  Little things will drive you crazy, you know, stuff like:  poor rowing, not reach casting, aggressive mending, wading too fast towards a rising fish, or the nails on a chalkboard-like act of fishing at night with a light on.

You've gotta learn not to sweat the small stuff, and like all relationships, you have to work at it if its going to succeed.  And if you're lucky enough to find a fishing buddy worth calling a fishing buddy, consider yourself lucky.