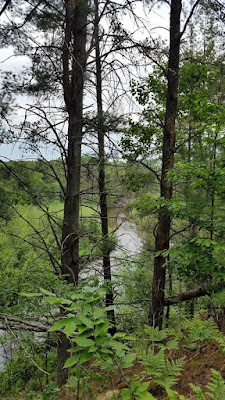 I hit the restaurant at Gates Lodge the other day for lunch.  My friend says you don't go to a place like Gates to order a turkey sandwich.  At his recommendation, I tried a corned beef sandwich they call the, "Eastern Rise."  Its shaved corned beef and kimchi, topped with melted swiss, on rye.  The chefs at Gates cook their corned beef down themselves, and have it down to a science.  The flavors that hit when you take a bite are, just, well, something I don't have the vocabulary to describe.

Matt took my order at the takeout window and we got to talking about fishing.  He and I always talk about fishing when we bump into each other, in fact I'd say most of our conversations have gone into detail on fishing stuff I wouldn't normally talk about publicly.  But this time he asked a question he normally doesn't-- "Where were you at?"  Now I've unfriended and blocked people on social media for asking that same question or variations of it, but Matt is a good dude, so I just gave him my canned response, "a gentleman never tells."

"Were you on the South?"
"No."
"The Main, the North, the upper Man, up North?"
"Nope,"  I answered to each in rapid succession.  He was getting desperate.
"C'mon, man, why won't you tell me where were you at? You were on the Main weren't you?"
"Yup."
He knew I was lying.
"Man, that's really kind of weird that you won't tell me what river you were on."
"I don't know who is standing behind me."  I said and laughed, knowing full well there was no one else in sight.
"There isn't anyone else out there." he said through the window.

I walked away feeling bad and proud at the same time, all the while wishing the conversation had taken place after he made my sandwich.

June is a great time to lie to your friends.  I talked to one person who showed up at their favorite spot to see 11 vehicles parked there.  11, on a stream 50' across!  I don't even understand how a guy could stop the car after pulling up and seeing another car or two already there, let alone, get out, gear up and go try fishing amongst the masses.  How the 11th guy did it, I have no idea.  The only thing keeping that place worth going back to after is the fact that 10.5 of the 11 don't know what they're doing.

While waiting for the evening rise one night, I posted a photo of the fog moving over a gorgeous stretch of river I was on.  It was beautiful, despite the poor fishing that would follow.  The next morning I got a text from a friend asking if I was on the Main.  I told him I was, even though it was a bold faced lie.

I love it when people try to guess where I was fishing and give up a good fishing spot I didn't know about in the process.  They'll ask if I was on river x, and then before I can lie to them, they will tell a story of how they really love that stretch below some bend where all those big trout pile up.  I'll just agree, replying that I love it, too, letting them think that's right where I was, even though I'd never had any interest in fishing there until that point in time.  And even though I never answered the question, they walk away thinking I had.  Its like a two for one deal, I keep my spot a secret and get a new spot to check out in the process. 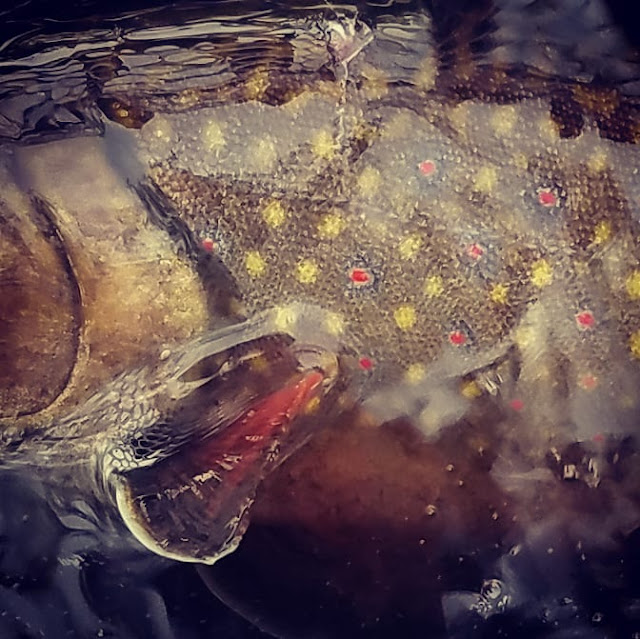 Traver wrote that you should, "never show a favorite spot to a fisherman you wouldn't trust with your wife."  I'm not sure that goes far enough.  I have four or five friends I trust enough to speak openly about my fishing spots at that level.  Though I'm not 100% sure as one lives 1500 miles away, two are much, much older than me and physically can't get to many of the places I'm usually talking to them about.  Older guys are usually more fun to fish with anyway, they have nothing to prove and all in all, just get it-- and they're not interested in your wife.

The downside of all this secrecy is that I truly enjoy fishing with other people, and since I can't trust 99% of them, I'm forced to fish with them on water I would rather not be fishing.  You know, tourist water.  Tourist water is the water everyone who has been around already knows about.  Its in all the local fishing guides, its easy to get to, and while its generally not the best place to fish, it gets the job done.

New fishing buddy candidates must prove they can keep those types of places a secret before I will take them to the next level of fishing spots, the spots that aren't in the guide books, but are still on the rivers everyone knows about.   If they talk about it to anyone else, or if they go back there with someone else after you introduce it to them, they fail.  I'll still fish with them, but will never again take them to a new spot or a spot without 11 vehicles in the parking area, but they're welcome to take me to theirs.

A good example of this happening recently was when I took a guy who I've known for some time out on a little known piece of tourist water, you know, to see if our fishing buddy relationship might be worth taking to the next level.  Not a day after we fished, we were both with a large group of people when he blurted out how awesome the fishing was the evening before and named the spot.  He had potential, so in a fishing buddy kind of way, it was heartbreaking.  But that's why I took him someplace marginal for the first date- not someplace that needed to be kept a secret.

A marginal fishing spot is better than one in pressured, pristine trout water if you're the only one who fishes it.  Spots in pristine trout water you have to yourself are sacred and shouldn't be shared with even immediate family, even if that means, someday, you break a leg and die a slow death, exposed to the elements because no one knew where to look for you.  The even bigger conundrum comes in for the guy that finds your pile of bones on the bank and has to decide if he wants to report the find to authorities and risk that spot to the world, or leave your remains, and his secret spot, a secret.

The catch-22 in all of this is that when the time comes that your secret spot is threatened by something-- oil/gas drilling, mining, a dam, etc.-- you're going to have a tough time trying to save it by yourself.  That's why there is hell and lawsuits to pay for anyone who even breathes on the Au Sable without brushing their teeth first.  It might be the epitome of tourist water, but it gets 300+ people to show up for it at a river cleanup.