Fly Fishing Through a Mid-Season Crisis


Its weird getting older.  I can't tell you how confusing it is to look in the mirror and see a guy in his mid to late 30's, cause in my mind, I'm still 17.  It isn't just me.  The people around me are getting old, too.  My dad will be retiring at the end of the week.  When did that happen?  It still feels like he is in his early 40's.

The same thing is happening with everyone I know.  The men and women who have been in the primes of their life for my entire life are slowing down.  And the people who I thought of as being old when I was 17, who weren't really old, but just slowing down, are now actually old.  Its crazy how fast it happens to them.  One day, they're physically or mentally able to do whatever they want; the next, they can't stand up by themselves anymore.

I remember when I was living out in New York, missing my favorite northern Michigan trout streams, and doing the math.  If I live to be the average age of 72, and I can make it back home to visit them for around 3 days a year, I've only got, at most, 126 more days on my favorite water.   Then I figured, ok, if our parents live to the ripe old age of 72, and we only get to see them 3 days a year, we're only going to get to see them about 60 more times.   Those numbers weren't nearly big enough and we moved home to northern Michigan soon after.

Its kind of a shock to the system, this feeling young but realizing you and the world around you aren't staying young forever, thing.  This must be what causes all of those midlife crises you hear about.  I don't think I'll ever have your classic midlife crisis.  My whole life has been a perpetual series of midlife crises.  I'll have no regrets on my death bed.

Which, strangely enough, brings me back to the whole point of this post, and that was going fishing a few times over the weekend with some retired guys.

Gary and Darcy are brothers and grew up fishing my favorite trout streams.  They've literally been fishing them longer than I've been alive.  Its cool to listen to their stories of "the good old days" and even the "bad old days."  But its even cooler seeing that many years of history on a stretch of river getting put to use during the evening rise. 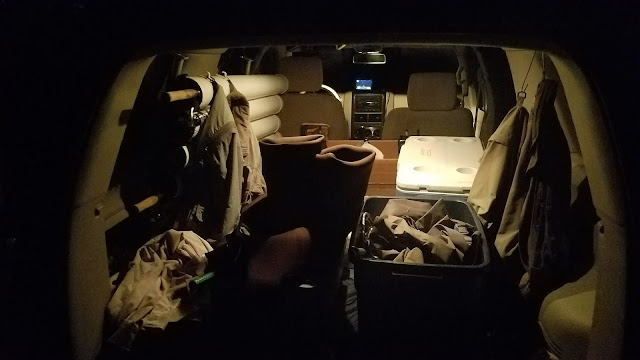 This picture looking into the back of one of their fish cars says it all.  These guys are still getting after it more than most guys half their age.  They're old school, and as I get older, I appreciate old school more and more.

One particular spot of Gary's had a visit from some other anglers over the last year or so.  Apparently, they weren't very good fishermen because they "pruned" entire tag alders away from about 30' of riverbank so they could cast to a nice seam on the opposite bank.

This is something I run into every season and it drives me crazy- those overhanging tags or other woody debris or vegetation are a big part of the reason many spots are good spots in the first place.  It drives Gary crazy, too.  So in retaliation, he is keeping every fish he can from that spot so when the jerk who can't fish comes back, there is nothing to come back to. Gary's revenge started with a 23" brown trout.
I had a really good fish going but missed the hookset on it.  I picked up a smaller fish in the high teens a little later before the spinnerfall ended.  Had another good fish going last night, too, but a rather large beaver came by just after it started rising and did the tail slap of death right over top of it.  Needless to say, my shot at that fish was over before it started.  There is a special layer in hell for beavers who do that kind of thing to fishermen, its full of 330 connibears and petrified wood.
Mosquitoes are out in force now.  Hendricksons and little black caddis are done or winding down depending what stretch you're on.  Mahoganies are going, borchers are going, and the first big show of the season (brown drakes) are right around the corner.  Two and a half weeks or so from now, hex will be going, and a few weeks after that, the peak of the dry fly season will be over. 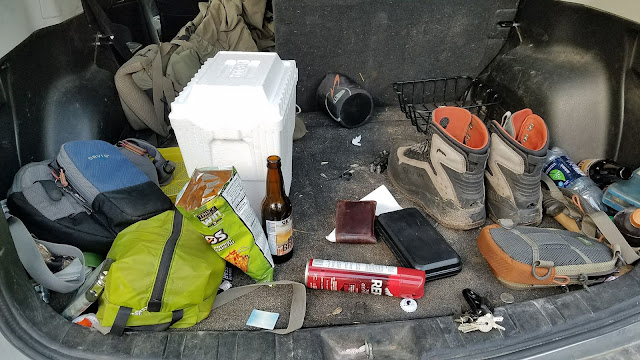 There will still be some good hatches to be had in late July and August, but its a midseason crisis we all must deal with.  June is the prime of the fishing season, and it never lasts forever.  So we'll fish every night, usually way past midnight, going on almost no sleep, chasing bloops and rise forms in the blackest of northern Michigan nights.
My entire trout season is a perpetual state of mid-season crises.  As Josh says, trout season is just a bunch of two week seasons.  There is always something peaking, somewhere.  So whatever that micro-season is, I'll be trying to hit it just right on just the right stretch of river, as many nights in a row as possible.  And when the season is winding down and I am realizing that its over, there will be no regrets.