On Grayling Reintroduction in Michigan 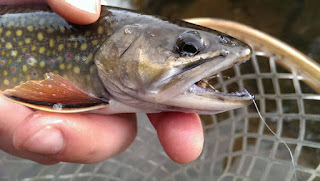 Its no secret that the Michigan DNR and local Tribes are in the midst of arctic grayling reintroduction efforts in the northern lower peninsula.    I'm a native species guy.  I'm a staunch supporter of doing whats best for native over introduced or non-native or invasive species.  I feel robbed that grayling were extirpated before I was born and I never got the chance to fish for them on my local streams.  I wish they were still here, I really do.  But I have a really hard time supporting arctic grayling reintroduction efforts in northern Michigan streams, starting on the upper Manistee.

The reason is pretty simple, I'm a brook trout guy, brook trout are also native to many northern Michigan streams, and I learned Gause's Principle in college ecology-- no two species can occupy the same niche.  They can share the same habitat, but eventually, one will go extinct.

While logging and overfishing tend to get most of the bad wrap for the extirpation of grayling in northern Michigan streams, what really did them in was the natural expansion of brook trout, whether brookies naturally colonized new waters that grayling previously dominated, or if they were stocked in them by man.  Grayling were in decline before logging and overfishing.  I know this from reading historical accounts, but was recently reminded of it while doing some research on an unrelated subject.

I was reading a paper written by RE Vincent in 1962, "Biogeographical and Ecological Factors Contributing to the Decline of Arctic Grayling, Thymallus arcticus pallas., in Michigan and Montana."  In it, Vincent writes:

"Exotic trouts were early introduced into grayling waters.  In some streams grayling populations were already low; in others they were still high.  In nearly all grayling streams, exotic trouts flourished and grayling declined.

Accepting Clements and Shelford's (1939) definition that competition is a demand by two or more organisms for the same resources or conditions in excess of immediate supply and realizing the validity of Gause's Rule (Gause, 1934), which states that an ecological niche cannot be occupied simultaneously and completely by a stable population of more than one species, it is apparent that trout introduction into grayling communities would necessitate community adjustment.  As trouts and grayling are in many ways ecological equivalents, when the introduced population reaches a high enough density both species would be utilizing the same environmental resources.  The eventuality that one of the species will become extinct is shown by Frank (1957), Gause (1934), Park (1948), and others.

Competition may be direct, as active antagonism, or indirect, as a species monopolizing a given resource needed by another.  The more closely ecologically related the species, the more intense the competition.  Degree of competition changes as environments fluctuate to favor one or the other competitor.  Along an environmental gradient whose extremes favor two species, there would theoretically be a point on either side of which each species would be superior (Crombie, 1947).

Competition has been repeatedly suggested as the major cause of grayling decline (Brown, 1938a; Creaser and Creaser, 1935; Henshall, 1916; Thompson, 1925; and others).  According to Brown (1943), the absence of competitive trouts seems absolutely essential to grayling survival.  In nearly every watershed it is difficult to separate effects of competition from other simultaneous influences.  In many places where exotic trouts have been introduced, the grayling has declined, but often other changes were involved."

In 1841, Hubbard wrote that there were no brook trout until you crossed the Mackinac Straits.  I find it questionable that he fished every northern Michigan stream extensively enough to make such a claim.  I doubt its validity even more when you consider that just 15 years later, Lanman (1856) reported an abundance of large trout in the tip of the northern lower peninsula.  Around the same time and even in accounts written a few years earlier, others reported abundant brook trout populations in the Traverse region-- not in every stream, but some.  The streams where brook trout were abundant, grayling were not, and vise versa.  (Starting to notice a pattern here?)

Still, there is no doubt that brook trout were rapidly expanding their range into northern lower peninsula streams.  By 1869, it is documented that they inhabited streams as far south as the Manistee flowing into Lake Michigan and as far east as the Ocqueoc which flows into Lake Huron.  This is all before brook trout stocking got going in the northern lower around 1879.

There is a great table in Vincent's paper (Table 6) that documents historical accounts of both grayling and brook trout populations in the Jordan River until grayling were extinct.    It goes from the Jordan being a grayling stream with a few trout in 1857, to trout being the primary species caught in 1875, to grayling almost being gone in 1877, to grayling being nearly extirpated in 1879.  Similar timelines exist on the Boardman and Boyne Rivers.  In the Au Sable, logging might have played a bigger role in the decline of grayling than what was happening naturally on other northern Michigan streams.

Whats my point in all of this?

We can't bring grayling back without killing all of our trout.  Gause's Principle says so.  It all comes down to survival of the fittest, and if grayling can't compete with brook trout, how are they going to handle 25+" brown trout that are thriving where the State plans to reintroduce them in the upper Manistee?

It all boils down to this:  we are either wasting our time and money for a "feel good" story that will eventually fail.  Or we are going to have to kill all of our wild trout in the upper Manistee to help grayling reintroduction permanently succeed (and even then, it might not succeed).  These are trout that government and conservation groups have spent bajillions of dollars and volunteer hours conserving and protecting for the last 125 years.  Are we willing to throw that all away for a fish that by most accounts isn't as good to eat as trout or as fun to catch, ?

And what happens if I'm wrong (and over a hundred years of science are wrong) and grayling reintroduction efforts are successful, but they gain classification as threatened or endangered, and say, my local TU chapter wants to add some large woody debris in the Deward Tract on the upper Manistee or maybe plant some cedars or take out a beaver dam there to help trout?  Will the government let us?

What if its determined that streams with reintroduced grayling need to be closed to fishing to prevent accidentally catching grayling-- will they close trout fishing on the upper Manistee?

What streams are next on the list for grayling reintroduction?

Why are we doing this again?