If You're Not Eating Trout, You're Doing It Wrong 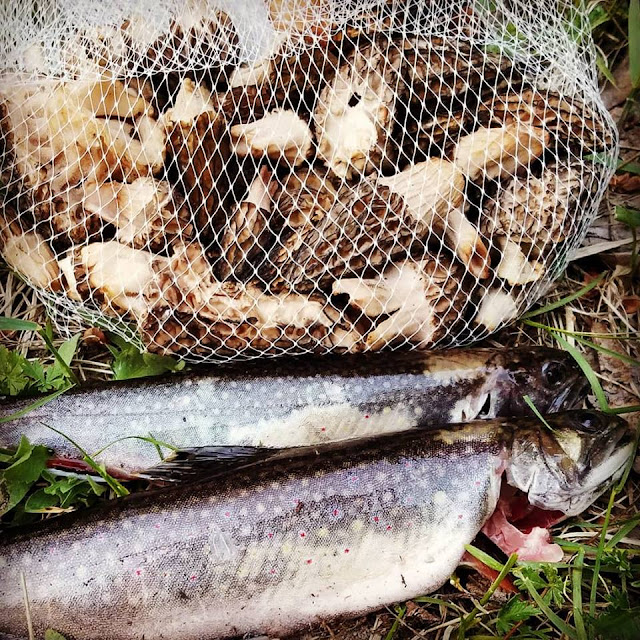 I recently came across a post on the Trout Unlimited facebook page where someone got all worked up over TU sharing a video on how to debone trout.  I believe the comment went something like, "This isn't what TU is about!"  For the sake of protecting his identity, we'll call him stereotypical trout guy (STG).  This is not the first time, nor will it be the last, that I've seen this type of reaction to anything associated with keeping trout versus always releasing them.   There are a lot of STG's out there.

I used to be a STG.  Wait, let me say that again.  Hello, my name is Alex and I used to be a stereotypical trout guy.  I was all about the catch and release.  I loved trout, why would I want to kill one?  And then I realized the inherent hypocrisy in my outlook and practice of 100% C&R.

The act of hooking and fighting a trout causes stress on the trout.  That stress manifests itself in the form of lactic acid build up in the fish's bloodstream.  Once a fish reaches acidosis, or a point where the lactic acid buildup is so high that the trout's bloodstream can't get rid of it, the fish will die whether it swims away or not.  And that death often occurs hours after being released due to issues created during the fight and release. And that's all before that killer instagram photo session takes place.

Maybe stereotypical trout guy should be more concerned with fighting and stressing trout out for his own amusement only so they can swim away and die?

So I could be a hypocrite, or I could fish for the same reason humans have fished for thousands of years...food.  I don't keep every fish I catch, and still have plenty of fishing trips where I don't keep any fish.  But I keep enough for dinner just often enough that I don't feel like a hypocrite anymore.

The crazy part?  Trout taste awesome.  Brown trout not so much, though I've heard a particular strain of lake runs on one of my local trout streams are pretty good.  Rainbows are ok, but I don't run into them very often.  Brookies are delicious, one of the best fish I've eaten and right up there with whitefish, walleye and salmon.

The first thing I do as soon as the decision has been made to keep a fish is bonk it on top of the head and gut it wherever I am.  Two brookies in the 8-12" range are what I'm after.  Smaller or bigger fish will be released.  If I'm not going to eat them right there on the stream, they go into a container of some sort that will keep them cool until I get home.  I never freeze fish, they taste a million times better fresh.

My favorite way to cook brook trout is nothing fancy.  If on stream, I cook them unseasoned over an open fire.  If I take them home, they'll get fried in butter, hopefully with morels if I have any.
at May 23, 2018