Went out shining again last night, was running ahead of schedule so I hit a big field of wild grass on some state land first to glass for a while. I was pretty optimistic for good deer movement as I saw a lot of deer on their feet on private fields I drove past on the way there, including several small bucks. Got to the field and there was a doe with a fawn on the far side. I watched them for a while before they disappeared over a rise. Then the field was empty until it was just about dark enough you wouldnt have been able to see your sight pins. Two fawns popped out of the woods about 5yds from my car.

They checked me out for 30 seconds and then ran for the center of the field. When they got about 30yds away, they disappeared into the tall grass. I could see their silhouette through the grass every now and then, they had bedded and were just kind of hanging out. After it got pitch black, I rolled the car window down and spotlighted the field, nothing. I was trying to avoid any elk so I drove to a nearby road that divides a series of hardwood ridges mixed with grassy meadows from a large cedar swamp. It's a few miles long and there are a good number of deer in the area, but not where I could see them last night. Only saw a family of raccoons on a dead, fallen over poplar. I had about 10 minutes left until legal shining hours were over so I shined a clearcut in a cedar swamp a couple miles away. Nothing. I did see a trail of glow tacks going into the woods the likes of which I've never seen before. It was like a IED went off full of glow tacks. Probably borderline littering, haha! The pic doesnt so it justice, but somebody has a trail going into the swamp with 3 to 5 tacks on every tree as far as you can see. 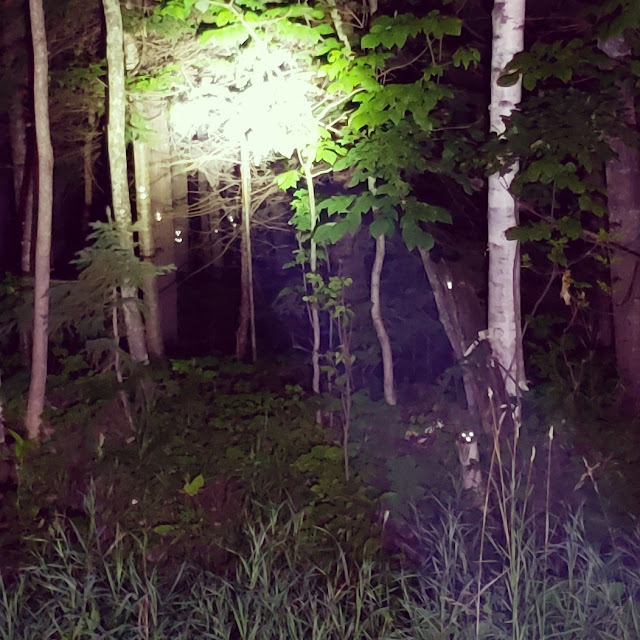 There are so many glow tac trails through the woods, its ridiculous. Where is your sense of adventure, people? Once a friend and I got lost coming out of a trout stream one summer night and the quantity of glow tac trails left by deer hunters actually got us more lost. Taking tonight off to get ready for a camping trip this weekend to the UP. You can feel fall in the air now, expecting to see the first leaves starting to change color every day which is right about on cue from years prior.
at July 30, 2019