Decided there was one more spot I wanted to do an observation sit on. Long ridge that juts out into a point/peninsula on a lake. At the top of the ridge was a secluded crp field. There was a dead end road at the base so I parked there and started work my way to the end of the point and then was going to walk up the hill and sit on the crp. As soon as I got to the tip of the point, I hear a deer jump up near the top. I look up and throw my binos on it and it's a really nice buck in the 120 to 140 range. He goes about 30yds and looks back at me. I pretended like I wasnt paying attention to him and walked back to my car and drove away. I think that deer was bedded, which was weird because of the time of day and time of year, but even weirder for the wind direction. The wind was going up the point. But, he could see where I parked from his bed, so I think he was access watching. I drove to the next nearest access and scouted the rest of the ridge hoping to make a game plan for that evening.

Had lunch around noon and went in from behind him, hoping he didnt leave after I left. It was probably a mile or so from the next nearest access. I got to the crp, flicked the ticks off, and Bush whacked through it. The plan was to get just off wind from where I thought he would come off the point and shoot him before he got to the crp. When I got through the crp, I didnt see a tree I liked that wouldnt skylight me. There was a stiff breeze with sporadic gusts, so I decided to stalk the bed and shoot him in it hoping he was facing downhill. It probably took an hour to get within sight of it. When the breeze would settle, I'd stop, when it would blow I'd move. It was a great stalk that I was very proud of, only my target wasnt there when I got to him.

I dropped down the hill and walked a mile and a half to plan b for the evening sit. A ridge top funnel. I was only about 6' up in a macgyver saddle I use sometimes which is basically a muddy ambush harness. Works great but pinches the hips a little. I just used the top if my beast sticks as a platform. That worked great, too. 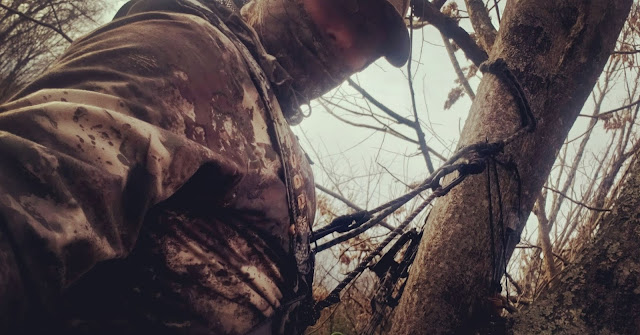 20min before last light I got a wild hair and got down and spot and stalked my way through the funnel. The funnel was thick briars surrounded by grass/clover fields. I saw a rabbit at 40yds and drew on it, as I was settling in to pull the trigger, a deer walked out in my sight window 10yds behind it. I froze, the deer looked up at me and did the head bob thing. I let down and it bolted out of sight around a corner to the left. I quickly snuck up to the corner and it was still there with another doe at 43yds. I had a shot and am comfortable shooting that range but wanted to get closer. Blew it and they ran.
at November 04, 2019