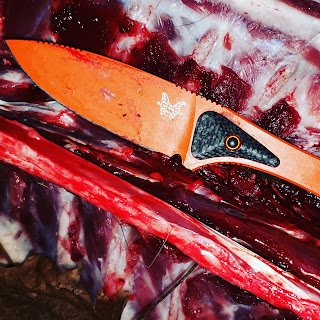 High temp of 38 was forecast so I packed an extra layer. Was set up before first light and sat until noon, didnt see anything. Met Jason back at the access and we hit a small diner to warm up and eat lunch. While eating we talked and I decided it was the point in the trip where I would shoot the first adult deer that gave me a shot. He already had a doe and said he would take the first branch antlers buck that came by.

I took him to a new spot, it's quite a hike through some pretty rugged terrain. He thought I was joking when I told him not to fall off any cliffs. This place is the epitome of an overlooked spot or the epitome of a spot most guys wont put the effort in to hunt. I found it cyberscouting and scouted it last year and gave it one sit and saw deer. I had a ridge in mind for both of us and told him where to set up and we split up.

I kind of laughed watching his reaction to the terrain and told him to turn the topo layer on in onx and go around the ravine ahead and up the next ridge.

I get up to the point on my ridge and start scouting. I find a tree between two bedding areas where the wind will blow my stink to no mans land but is right for the deer. The other reason I chose the tree I did was any deer that came in would have to come in upwind of me, and if they looked at me, they would have to look into the sun. I got my sticks on the tree and before I even had my safety harness hooked up, a 2.5 year old 8pt came in. I pulled my bow up and laid it across my linemans rope, put my release on, ranged him, and shot. He mule kicked just after I lost the flight of the arrow and ran a 20yds then started walking normally. If I hadn't seen the mule kick, I would have thought I missed by his body language. I waited 30 minutes and went to go look for my arrow or first blood to see what happened. Coukdnt find either and was pretty certain I missed, but the mule kick made me uncertain. Do deer mule kick when you miss? I got back up in my tree, ran through everything in my head and got back down again and looked for some sign to tell me if I hit or missed him. No blood, no arrow, no hair.

I got back up in my tree. 30 minutes later a few doe came in. They were in a patch of super thick briars and grape vines that made the bedding area just north of me. I could see a deer body part here and there as they milled around. Finally, one moved towards my side and I had a 6" hole through the thorns at the vitals. I drew and fired, the impact sounded good and blood was pouring down the near leg and then both legs within the first 15yds. She stopped and tipped over at 20yds. I felt relief. I dont know if I could miss another deer this trip and be able to look in the mirror.

I didnt want to interrupt Jason's hunt so I packed everything up and hiked out, swapped my sticks and hunting stuff for my game bags and knife and hiked back in. I had her quartered just before dark. As I was finishing up, a different small 8pt walked in on me. I looked up and we had a short stare down before I bared my teeth and growled at him. I loaded the meat on my pack and saw Jason's headlamp coming through the woods as he worked towards our meetup point. I whistled at him and he stopped and I hiked down the hill and recapped my hunt.

He beamed about how awesome the spot I sent him was. He said he shot a 2.5 year old 8 just before dark and wasnt sure about the shot placement. It sounded to me like he made a good shot but we decided to play it safe and come back to track the next morning. The way he described the shot and deer behavior after, I was confident we would find a dead deer in the morning. I was also kind of happy I wouldnt have to hike back in after packing my deer out.
at November 08, 2019