Ok, finally got a ballpark idea what the weather was doing for the pics that I got during yesterday's card pull. Like many guys on the beast, I can really geek out on this stuff. I think there is a ton of value in using data to highlight patterns or trends you wouldn't have been able to pick up on otherwise.

That said, I also think there is an over-reliance on trail camera photos, apps, etc., and not enough on experience, woodsmanship or gut instinct. So I have to force myself to kind of hit the brakes on the data/technology stuff sometimes, particularly when I'm having a tough time or feel like I'm in a rut.
Every season I have a mental breakdown or two where the deer just aren't cooperating with what I think they should be doing. The way I always pull myself out of that is by going back to the basics- looking at maps until I find an area I think looks good, scouting until I find good deer sign and setting up on it.  Not by spreading trail cams everywhere until I get deer pictures.

This camera sat sat on a small ridge, a little too long to call a spur, that juts off from a really long ridge from 8/11-9/21/19.  The camera was facing north towards the bedding area, but roughly 200'ish yards away. As tempting as it was to leave the camera right in the bedding, I didn't want to ruin the spot. I felt that bedding area was solid for a south wind, but also a good place for them to bed under pretty much any other wind direction. I hoped the deer would be using that point to travel to and from that bedding location. But I wasn't 100% confident in the camera spot. There just isn't a ton of cover in that specific area and I felt deer travel would be better 50yds east by a transition between open hardwoods and a raspberry thicket.

A bachelor group came through from north to south the morning of 8/16.  The wind was out of the south that morning but it was super light. Two hours after that group of pics was taken, it started coming from everywhere, but still only 5-10mph. I'm fairly certain two of these three bucks were the ones I jumped on 8/11. The smaller basket 8 is 2.5 years old, not sure about the one that isn't completely in the frame, but guessing the same. The bigger 8 is also a deer I'd guesstimate at 2.5, but his body does look a little more mature than that basket 8. 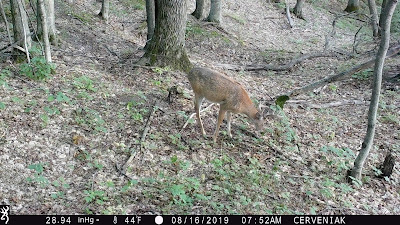 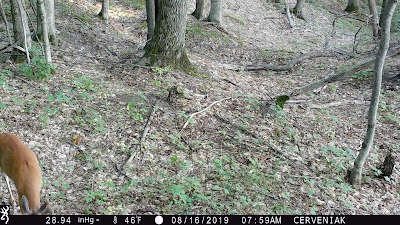 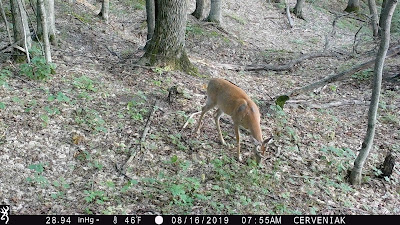 Lots of pics of a family of three raccoons using the ridge, as well as a single coyote coming through four separate occasions. Doe's and a doe with a fawn came through fairly regularly, not every day, but just about.

That was it for buck pics. I ran into a guy and a woman on ORV's hiking out, about a 1/4 mile from where I was heading. They were stopped, drinking a beer, looking at something I can't disclose publicly as it might give the spot away. I made small talk and walked past and got about 100yds away when I could hear the engines on their four wheelers fire up. Not wanting them to have any idea about where I was going, I sprinted into the woods towards a small root wad and hid behind it until they passed and were out of sight. They had no clue where I went or even what direction, but the encounter was enough to cause me to pull the camera instead of swapping the card out. I've got the intel I needed, and combining that with past experience at this spot, I feel like I have a good chunk of the puzzle put together.

Before I stumbled into Dan Infalt's DVD's, I thought of this spot as a rut spot. And it is good for the rut, but now I understand why- its a thermal hub. That funnel created by the point and the thicket to the east sucks deer within bow range in some big, big woods. I would save it for early November, but since I won't be here in early November, I'm going to hit it early and again as close to early November as possible. Definitely looks like a winner for a south wind, but I need a SW so it works for me and the deer if he is bedded where I think he is. SE could work, too, and the more I think about it, is probably better. Stand location will be roughly halfway between the bedding and the camera location, as close to the bedding as possible. Late October, I'll be at the SW corner of that raspberry thicket and taking advantage of what I kind of think of as a spot where two funnels turn into one super duper terrain funnel.

Wife is out of town hunting rocks in the UP, so I've got all of my gear spread out in the living room, hunting beast DVD marathon on the TV (minus farm country, don't have that one yet), and leftover pizza on the counter for lunch. Life is good.
at September 22, 2019