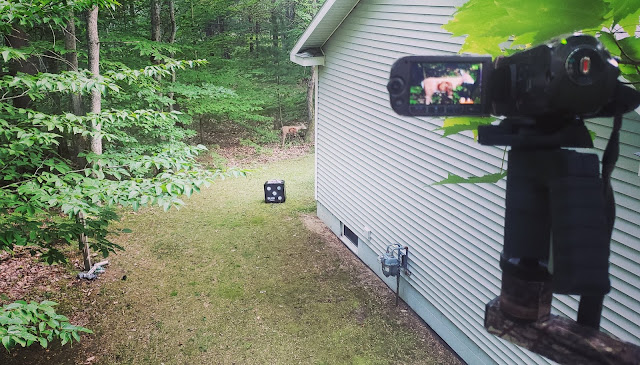 Took my whole hunting system- minus clothes- out in the backyard last night and went through all the motions. My setup is basically the same as last year, but I’ve made enough little tweaks here and there that I immediately noticed things that I didn’t like or that I’ll need to retweak.

The first problem was when I got up to the tree and took my stand/sticks off my back, the quiver bracket attached to the sparrow I added this offseason hung up on one of the straps on the back of my safety harness. This isn’t an issue with the sparrow, more with the big C shape of the Matthews quiver bracket. Almost couldn’t get my stand off my back, haha, then it happened again when I got to hunting height on my sticks and went to pull it off to hang it. I need to find a new place for the sparrow or its going to have to go. Not really interested in changing quivers at this point in time, but a quikee quiver bracket would solve the problem.

The other issue I ran into was with my camera arm. I have no freaking clue why I got the bug to try self filming a hunt this year. I’ve ran a smartphone mount on my stabilizer the last couple seasons to film the shot and it was pretty helpful in figuring out where exactly I hit them and how soon I could start tracking. But it had a lot of limitations. I don’t wanna be a TV star or anything, but I think it would be cool to have a video of the hunt to share with friends as well as to be able to look back on it in the future. I picked up a beast camera arm and it seems to be pretty nice, only issue is it wants to unfold out away from the tree as you’re hanging it, which makes it kind of a pain to hang. I think I need a short bungee or strap that can keep it folded up until I’ve got it on the tree and ready to mount the camera on. I’m kind of tempted to drill the arm out, beast stick style and switch the tree bracket to a batwing, too.

Did some shooting and seemed to be shooting a couple inches to the right and to the left if I didn’t really focus on my anchor. I think I need to get back in the habit of bending at the waist. I thought I was, but my arrows were telling me otherwise. It felt a little funky having the camera arm kinda right there, just to the right of the bow, as I was at full draw. It was a distraction the first couple shots, but I forgot it was there after. Practice, practice, practice over the next month will put these issues to bed. Oh almost forgot, played with the stick talons for the first time while actually going through all the steps and stuff of hanging a stand. I added these a couple weeks ago and am really attracted to the concept of a single trip up the tree. Jury is still out on if they’ll make it to the start of the season. They hold the sticks nice and solid, basically doing everything I wanted them to so I can make a single trip up the tree, I’m just not sure if that’s what I really want yet.

While I was up there my wife came outside and poked fun at me for what I was doing. Something about me being obsessed. There is no doubt about that, but I justified it by saying, “babe, there are only 41 days until the season opens.” You could see the light bulb kind of go off when she realized that summer is almost over.
at August 20, 2019