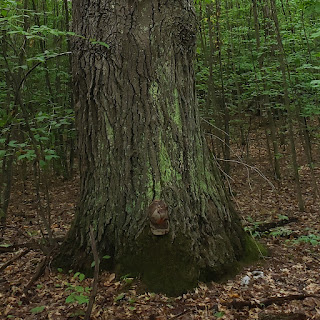 This is a monster white oak I found about 5 years ago. It's close to 5' in diameter. White oaks arent common in my part of Michigan. They're almost rare and worth keeping a secret from even your mother. I have two spots that have white oaks, one has a bunch of reds mixed in with them. I was in the area of one of these spots today so I took a side trip to see how their acorn production was going to be this year. The short story is they are loaded and already dropping.

I had an unsuccessful but awesome season hunting this spot a few years ago when I first found it. There are some really nice bucks in this area every year and I have a pretty good idea where they bed. It's funny how people- particularly men- go through phases. This carries over into how we hunt. I've gone through my share. First was funnels, I was fanatical about them. Next was being mobile. There was the scent control years. The mock scrape season. Plus about a half dozen others, I laugh about some of those, but they were important to my development as a hunter. I learned stuff while going through each one, and some of the stuff I figured out stuck, becoming permanent and rolling over into whatever the next phase on the list has been and is still in my tool box today. 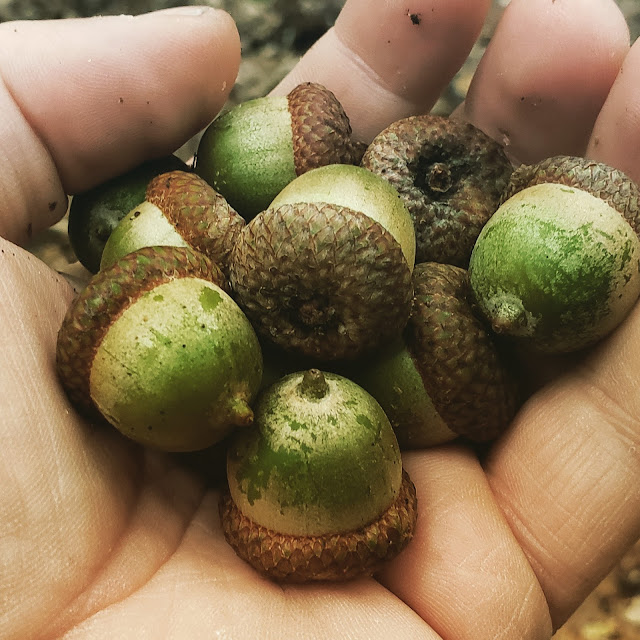 I mention all that because I feel myself rolling out of the most recent phase for the 2019 season- hunting deer in spots 100yds to 2 miles in like I was on a western elk trip 10 miles into the backcountry. I pulled the fanny pack out of the closet yesterday and will use it instead of the pack this year. Well, at least for the early season before I start needing to bring cold weather layers along. But some of the stuff will carry over. I will never drag another deer out of the woods again, gutless method and quartering is the way to go.

Got the stick talons dialed in now. Think I have a solution to make the Matthew's quiver bracket not hang up on stuff when mounted on the sparrow. Bow and broadheads are shooting darts out to 60yds. Trail cams are all out except for one I'm saving for if a "just in case" spot is identified. I've hung my stand in the backyard so many times the bark is almost gone. I'm sick of dicking around with gear and want to hunt.
at August 27, 2019